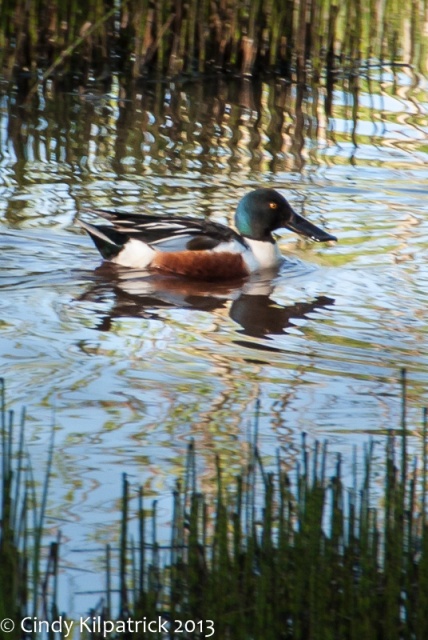 The first pictures this year of the Northern Shovelers on the marsh near my work were taken on May 21. Two pair, or at least 2 males and 2 females floated, paddled and mostly put their heads down like a snow-plow’s bucket and skimmed the water beneath the surface for nourishment.

Two pair of Northern Shovelers and a pair of Green-Winged Teal on the marsh, late May

As dabblers, Northern Shovelers feed on any little animal or vegetative matter they find in shallow water and prefer marshes like the small wetland I visit most days. Their enormous, spoon-like bill and comb-like projections on the tongue give them the advantage of being able to strain small invertebrates from the mud at the pond’s bottom. The scientific species name clypeata means ‘furnished with a shield’ referring to this duck’s unique bill.

At first it wasn’t obvious that these ducks are monogamous. The four of them seemed quite content to dabble together, but within days it was clear that my little marsh might not be large enough for them all as at least one male would spring from the water towards the other whenever he came too close to his mate. Rising in a rush like a spring, he cut a low, direct path to the intruder, briefly scolding him, “took, took, took”, in his restrained but obviously effective way. Then circling to return and skim the water, with one strong wing stroke he would come to a skidding stop close to his mate. It was comical to see how quickly he would return to feeding as it was all in a day’s work.

Returning from a short flight to warn away another male, a Northern Shoveler skids to a stop with his powerful wings.

Other ducks and even the resident muskrat don’t give him a moment’s pause. I often saw the Shovelers sleeping or preening on a raised mound of muskrat-mud with the much smaller green-winged teal, or sometimes a blue-winged teal close at hand.

Unconcerned, a male Northern Shoveler preens himself while a much smaller male Green-Winged Teal swims near his mate.

Floating, sitting or standing – bright orange legs and feet displayed – the female seemed to be always either feeding or sleeping. The male, in contrast, appears to spend the majority of his time preening himself. Perhaps that’s how he entertains himself while keeping watch.

While his mate sleeps with her head tucked up in her wing, a male Northern Shoveler preens himself.

Almost as large as the Mallard, with a wing span of nearly a metre and a similarly coloured, iridescent green head and neck, the fairly common Northern Shoveler is often at first confused with this ubiquitous duck. 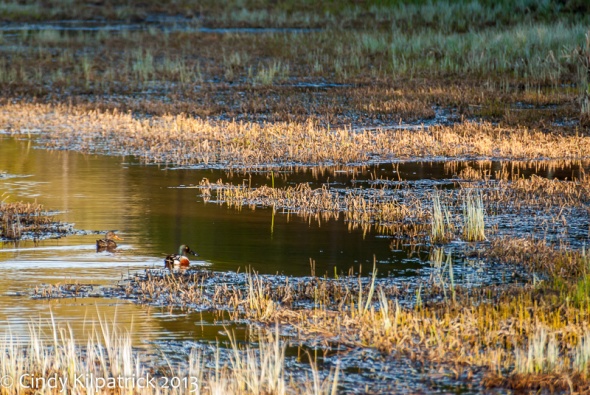 The morning light shows the iridescent green head and chestnut-coloured sides of the Northern Shoveler, reminiscent of the Mallard. However identification can be clarified by the massive bill, yellow eyes and white chest.

A closer look will end the confusion. As the marsh vegetation grows, it becomes more and more difficult to see the residents but the male Northern Shoveler often stands out with its yellow eyes, bright white breast and belly, and rufous chestnut sides, a fleeting sparkle in the reeds. 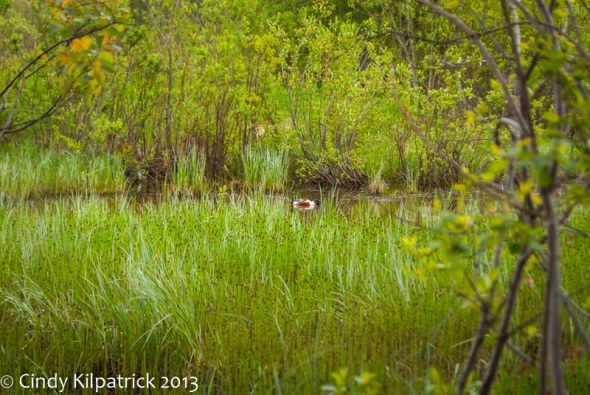 A ‘channel’ through the marsh reveals the eye-shaped identifying pattern of the male Northern Shoveler.

The female in contrast, as most female ducks do, blends in well with the vegetation and its reflection in the water with the dappled-looking chevron pattern of her back and wing feathers. I look for her huge yellow-orange rimmed bill shining in the sunlight. The Northern Shoveler’s profile is the give-away.

A cloudy sky deadens reflections that normally help camouflage the unique silhouette of the Northern Shoveler as she rests on a clump of mud and grass.

Now I believe they are nesting. The marsh is quiet. The female should be sitting on eggs in a nest hidden in the thickest vegetation, purportedly away from the water. It’s getting more and more difficult to discern whether there are still two pair in residence. If there are, they are staying well clear of each other as I only occasionally see a lone male to reassure me that they’re still around. 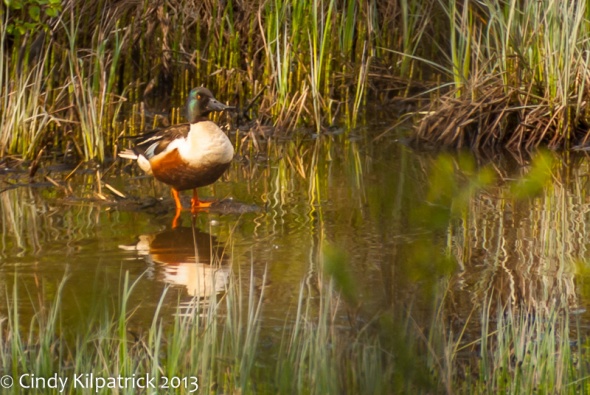 An aggressive defender of his mate and territory while breeding, the male Northern Shoveler often abandons the family during incubation.

I’m very curious to find their nest since the little wetland is bordered by a thin strip of conifer forest rising right into town. Northern Shovelers are said to nest 75-200 feet from water. If that’s the case, although I am a poor judge of distance, I’d say they’re into the well-worn forest very close to industrial on one side (including an oil well) and residential lots on the other.

Northern Shovelers are monogamous, often returning to the same breeding and nesting areas between their long migrations as far as the west coast of Mexico.

For more information on the Northern Shoveler:

For some great pictures of the Northern Shoveler:

This entry was posted on June 16, 2013 by missusk76. It was filed under Birds and was tagged with Alberta, Canada, dabbling duck, Duck, marsh, nature, Northern Shoveler, outdoors, Swan Hills, wetland.

A Year of Nature in the Boreal Forest

Swan Hills, Al...
A Year in Nature
By Photographs and te...
Book Preview

I have discovered why people don't use the contact forms anymore and why their email addresses are not linkable. My inbox has become overrun by bots! So if you would like to contact me for a legitimate purpose please email me at missusk76@yahoo.com.
%d bloggers like this: