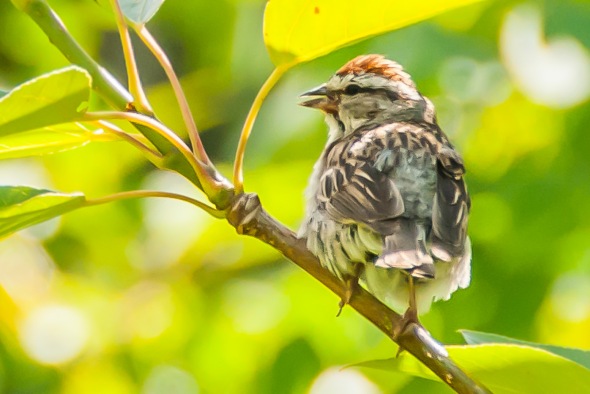 The little Chipping Sparrow is just another common LBJ (Little Brown Job) that we hear all the time and often see flitting around the ground and shrubs but can’t distinguish from all the other LBJs doing more or less the same thing. Although passerine just means “little sparrow” and spizella simply identifies it with a few other little sparrows, it is distinctive once you take a closer look. It’s named for the sharp chip it sends out to let its mate know where it is (its call). Its song can also be described as a series of super-fast chips but a rattle, or single-noted trill is more precise.

Those in the know claim that males who have staked territories near one another impressively develop their one repeated note into individual songs. The Chipping Sparrow’s song sounds a lot like that of a Dark-eyed Junco, but the sparrow’s note is repeated more quickly and is less metallic-sounding. A third sound this bird makes is an extended seep, warning of a nearby hawk or other predator. 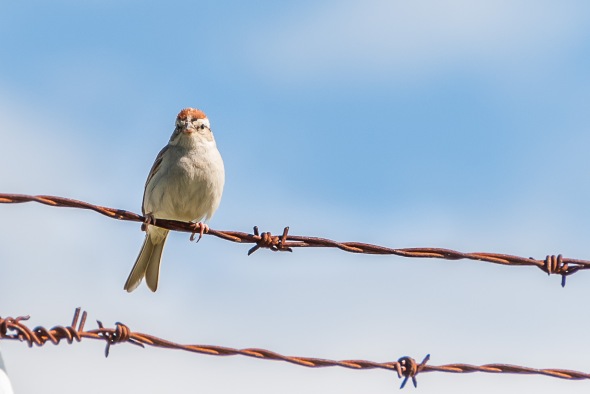 The Chipping Sparrow shouldn’t really even qualify as an LBJ since once it turns around, or you can see it from below, its smooth, pale grey breast, along with the dramatic black eye-line accented by a white eyebrow are giveaways. Its orangey-pink legs and feet are also characteristic. Migration takes this bird from far north of here in the Canadian sub-arctic all the way south as far as Nicaragua in the winter, where its bright rufus cap fades a bit and as if taking a tan, its breast and belly become a little darker. Fairly solitary during the breeding season, afterwards these birds form loose groups intriguingly known as a tournament. 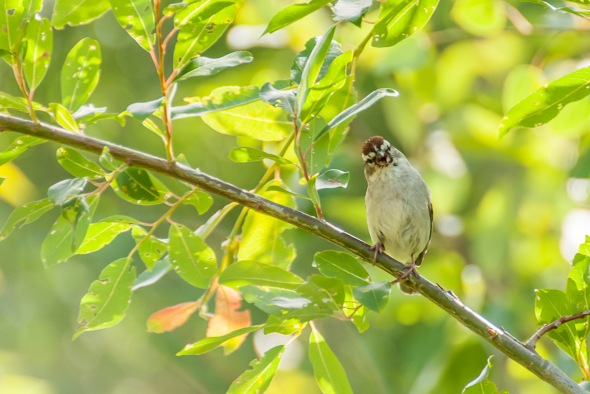 Males are quite territorial and will guard their lifetime mate as she builds her flimsy nest and incubates the eggs. Although light can be seen through the loose weave, she indulges her future nestlings with a soft lining of hair or fur. Chipping Sparrows were once known as “Hair Birds” for this reason. Although quite adaptable when it comes to the location for her nest, she prefers conifers (wild or ornamental) and usually builds among thick foliage at the ends of branches not more than 10′ from the ground. Like many other birds, the female develops a fluid-filled bare patch on her abdomen during breeding season that helps to keep her eggs warm during incubation. 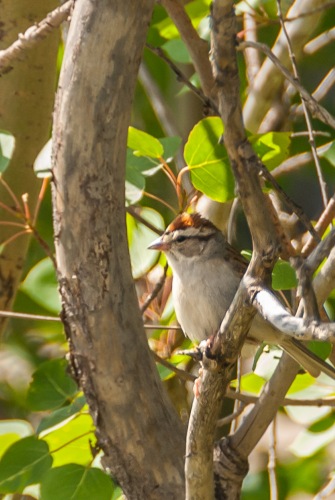 Seeds and small insects form most of the Chipping Sparrows diet. It will readily visit backyard feeders where it pays for its dinner by picking off some of the mosquitoes and flies.

In 1929, Edward Forbush called the Chipping Sparrow “the little brown-capped pensioner of the dooryard and lawn, that comes about farmhouse doors to glean crumbs shaken from the tablecloth by thrifty housewives.” Source 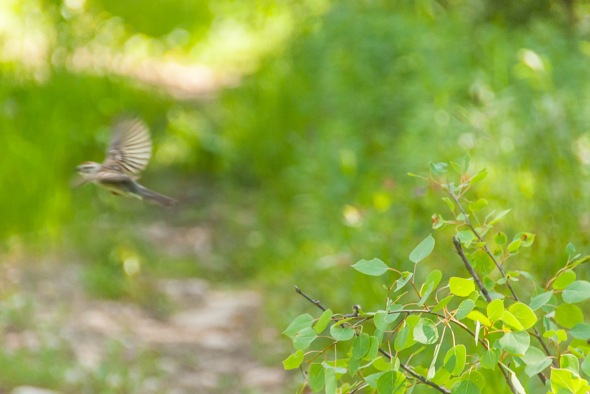 All About Birds
What Bird
iBird (iPhone app)
My nature books

Spring comes late in my part of the world, but I know it’s almost here when I hear the first exciting drum roll of the courting Ruffed Grouse. Usually, though, I at first mistake it for an all terrain vehicle or motorcycle that’s complaining of the cold as someone tries to start it up. It turns over a few times and then catches, runs roughly for a few seconds and abruptly stalls out. Then in a few minutes it does it again. “Bup…bup…bup…bup, bup, bupupupup, rrrrrrrrrrrrrrrr.” 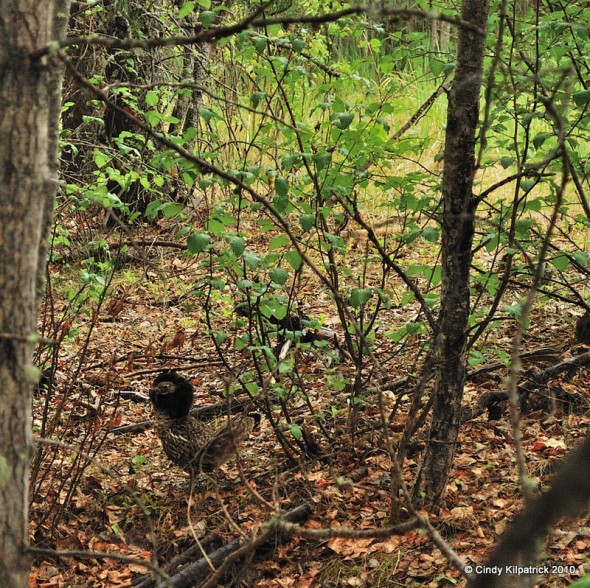 Last April two males chose drumming logs above the ravine less than 200 metres apart and this guy was not giving up his claim easily. I left him to it.

Sometime in early April the male ruffed grouse chooses a territory with a nice, old, preferably hollow log to use as his bandstand. There he will stand, with ruff fluffed out and tail fanned, and he will drum on and off for hours and days until the girl of his dreams decides that he’s the best drummer around. 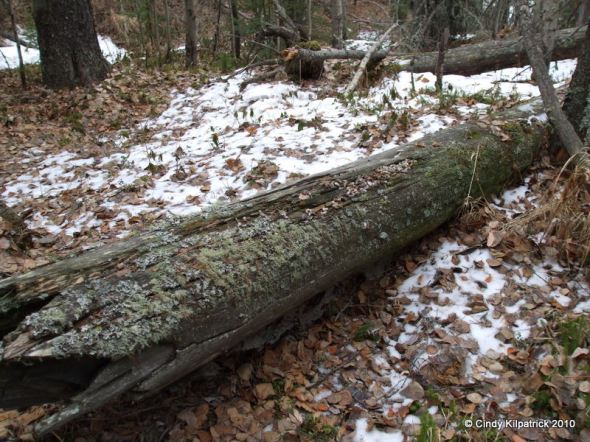 This is one of the logs chosen by a ruffed grouse last spring. I wasn’t lucky enough to catch him on it with my camera, but you can tell it’s been ‘chosen’ as it’s covered in droppings. 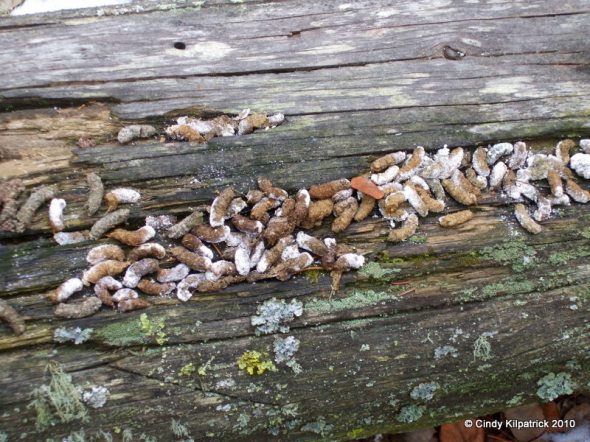 “Grouse scat is brown in color with a whitish end 1 inch in length to 1/4 inch in diameter. Droppings may also be found in the form of a small pile when feeding on succulent plants. Their diet consists of nuts, berries, green leaves and fruit.” (source)

The Ruffed Grouse is at home in a mixed wood forest. The grouse pictured here live in the mixed wood ravine of an otherwise coniferous forest and nest in the aging willows. Ruffed grouse are distinguishable from the Spruce Grouse, which is more adapted to the boreal forest proper, by the distinctive crest on the top of the head. There are other markings, among them the black-banded tail, but I’ve found that the crest is the easiest way to tell the difference. 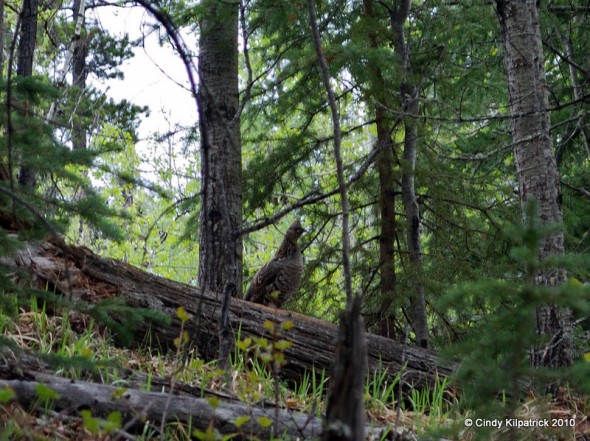 I’m used to being confused by seasonal plumage, but grouse are also masters at camouflage and talented shape-shifters. They can disappear in a heart beat. A flurry of flapping wings will be all you see if you startle them, but if they see you coming they will run behind a tree. In either case you’re not likely to find them again. They hide easily right under your nose, shaping themselves as a broken tree limb or a pile of leaves. 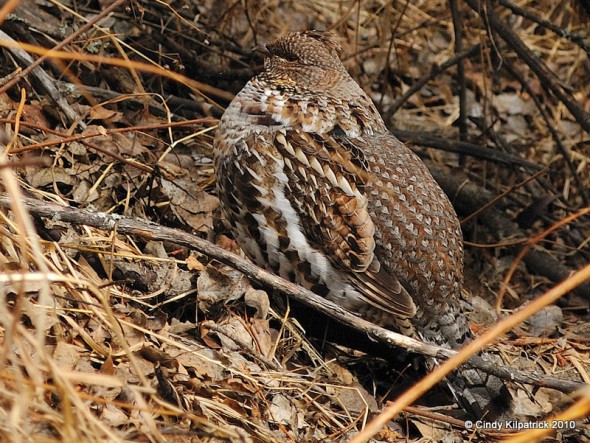 A Year of Nature in the Boreal Forest

Swan Hills, Al...
A Year in Nature
By Photographs and te...
Book Preview

I have discovered why people don't use the contact forms anymore and why their email addresses are not linkable. My inbox has become overrun by bots! So if you would like to contact me for a legitimate purpose please email me at missusk76@yahoo.com.
%d bloggers like this: